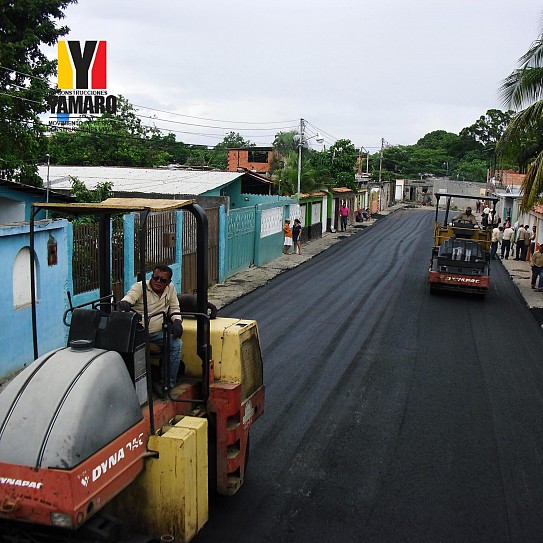 Construcciones Yamaro was founded on 07 November 1969, and it started its activities with the execution of earthworks. The company was established as a statutory document registered with the commercial register of the Judicial District of the Federal District, Miranda State, Venezuela.

During the first years they performed as subcontractors, making works of great importance in the country, such as “Francisco Fajardo” Freeway, Section Caricuao; “La Araña” Distributor for the consortium BARSANTI – SPILIMER; Maiquetia Airport: earthmoving work for EDIVIAGRO Company; preliminary works of cleaning the foundations and preparing the loans to EDIVIAGRO Company, Ministry of Defense: earthworks for the construction of its headquarters (EDIVIAGRO Company), among others.

With the passing of the years the company was dabbling in various road works in different states in Venezuela. Since the year 1991, Construcciones Yamaro expanded into other states such as Sucre, Monagas, Portuguesa, Barinas and Lara, where the company does different works in the construction industry.

Construcciones Yamaro -branch office in Lara- was incorporated under a statutory document registered with the Mercantile Registry of the Judicial District of Lara State on November 14, 1997 which is directed by the Engineer Ruben Dario Suarez.

Construcciones Yamaro is currently performing earthworks for the construction of roads, urban development, landfills and water works, all of this by using highly qualified machinery. In addition to that, the company is working on concrete activities, among which we can find: drainage, containment works, bridges, walls, gabions and earth walls armed volume of poured concrete. At the same time, the company works on Stabilizers Bases and Cold Recycling.

This evolutionary phase of the company presents the transformation that has undoubtedly played an important role according to its original mission and vision since its founding, taking into account the factors of the economic and business environment that gave rise to such transformations, and that today offer new possibilities for the company in a country like Venezuela.

The values of Construcciones Yamaro are perseverance, sacrifice, honesty, compromise, dedication and high quality of work, with the aim of creating jobs, move the country’s economy and also be able with care, maintenance and recovery of spaces throughout the national territory.

Construcciones Yamaro is currently commemorating its 46th anniversary with all the Venezuelan people, employees and family with the aim of continuing the important and committed work through the whole country with sacrifice, perseverance and dedication. Some of its social impact activities are:

Many of the companies in the construction sector in Venezuela are not only institutions dedicated to build buildings, streets or highways connected throughout the Venezuelan territory; these companies also have a great sense of respect and commitment to the environment and show that through their actions on behalf of the land and the people. Some of these construction companies are:

It is a construction company founded in 1969 by two Italian immigrants who came to Venezuela in the 50s in search of a better future for their families. Their career began when they just had a little capital and a single truck to transport construction material. Yamaro started as Subcontractor Company, title that changed in the 70s, when it began a busier and more prosperous work for the workers of Yamaro. In 1974 the company was formally registered as an independent company, and since then, Yamaro works with the construction of roads in the country.

Years later, with 400 workers, Yamaro took the challenge to build the San Fernando Road – Puerto Paez on the border with Colombia. In 1990 Construcciones Yamaro acquired its first asphalt plant, which allowed the company to advance in the construction of highways across the country.

Their values are perseverance, sacrifice, honesty, compromise, dedication and high quality of work, with the aim of creating jobs, move the country’s economy and also care, maintain and recover the spaces throughout the national territory.

Constructora Nase is a Venezuelan national firm, founded on December 13, 1972 in the city of Maracaibo, Zulia state, Venezuela. Since its creation, the company has ventured into the piping activities and works related to the water sector in the country, participating in building projects of adduction systems of drinking water in the main cities of the country.

In the 80s, the vision of Constructora Nase was expanded to services in the oil sector of the country, working with both private and transnational companies, for them to develop large-scale projects in these sectors, such as the installation of pipes ranging from 4 to 120 in diameter, various length and thicknesses; and multidisciplinary projects in engineering, procurement and construction.

During the 40 years of excellent and responsible uninterrupted service, Constructora Nase has established itself among the leading construction companies in the sector nationwide, always demonstrating responsibility, reliability and quality in the performance of the work, thanks to its excellent technical, supervisory and management staff; and with a great quantity and quality of own and specialized machinery for the implementation of these projects.

Constructora Nase takes steadfast commitment to excellence and environmental protection in Venezuela based on the following principles: